On April 1st 2013 Woot announced a new site called "Woot Tools & Garden" in addition to the main Woot site and the other Woot sites that already exist.

Now, if you are at all familiar with Woot, you already know that the writers tend to use a lot of sarcasm in their writing so it comes as a bit of a surprise that they launched a new site on April fools day. After all, some may have thought that Woot was playing a prank on them especially since they already have Home.Woot, but rest assured that this is no prank; Woot Tools & Garden really does exist and it does differ from Home Woot. Surprisingly enough (well maybe not), even Woot brought up the connection between Home Woot and Tools Woot and this is what they had to say:

So there you have it Woot Tools & Garden is ALIVE!

Tools.woot.com currently ranks #12 amongst sites offering online deals -- DX Offers ranks #11. In the Home and Garden category, Tools.Woot ranks at #2 -- Home Depot ranks #1. Tools.Woot is considered the most popular deal a day site, ranking in at #1. As for the 2nd most popular site, it's Giveaway of the Day. 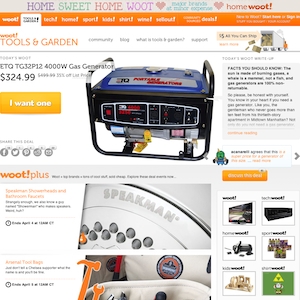