MMAHQ was founded in 2009 and is a daily deal site that offers discounts on MMA gear. The owners of MMAHQ.com also own BJJHQ which sells Brazilian jiu-jitsu gear, as well as another site named MuscleHQ.com which sells body building supplements.

MMAHQ also has a huge following and has received many positive reviews on social networks such as Facebook, Twitter, YouTube etc. The site even got a mention from MMA fighter Urijah Faber -- just do a search for MMAHQ.com on YouTube to see for yourself. 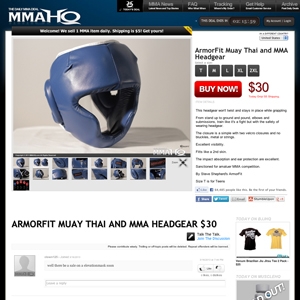