Geeks was founded in 1996 and initially launched their website on the domain name CompGeeks.com, but in 1998 managed to acquire the domain names ComputerGeeks.com and Geeks.com. For a while the company promoted their site under the domain ComputerGeeks.com but eventually started promoting themselves as Geeks.com. Today it's the 'go to' place for tech bargains and the place that has the 'one day deal' that is eagerly anticipated by "tech-savvy" geeks everywhere.

Offers many different computer and electronics deals. The exclusive shell... 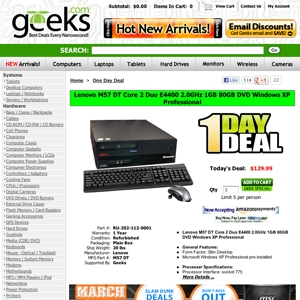